The Boston Science Fiction Festival is in full swing providing a steady stream of features and shorts to New England audiences, festival passes and passes to the Movie marathon can be found at the their website. Individual tickets to screenings can be purchased at the Somerville Theatre up until time of show.
Day two started with a series of shorts, the problem with the short programs is if I don't take good notes I am really at a loss to remember all that was shown. I do remember these.
Grounded - a wonderfully strange and simple film about an astronaut crash landing on exosolar planet. The idea was original and the execution of the effects was exellent. You can see something at this Grounded VFX Breakdown
One Jump From Home - with director Robert Lypka in attendance to answers question this little space story lacked polish but as a first project was a decent entry.
Nexus - A bit of a predictable little story of insanity, what starts as an experiment in isolation is revealed to be insanity. Unfortunately this story has been done way too many times.
Chorebot - A sad but also heartfelt story about a robot and the dog he cares for.
The Looking - This one fits right into my liberal paranoia. The story of alien invasion told through a NA meeting. It was a bit talky to get all the political ideas out but in the end eyes were opened. Of course how could it not be preachy when it is a therapy group.
No Relation - Heady and concise presentation of ideas about and also by writer Philip K. Dick, I feel a full documentary coming. (You can hope)
Blind Spot - Wonderful look at how our problems sometimes cause a blind spot, even at the end of the world.
The first feature was a local (Massachusetts) entry called "In the Renaissance" an atmospheric story of an apartment building that lives and breathes and births children. The idea was solid enough with the caretaker and children of the building. Director Damien Ober creates a great moody feel that really holds you, for a while. The characters though are a bit one dimensional and the tone stays the same throughout the film. Unfortunately the movie is driven by the character of the apartment building instead of a true protagonist that the audience can get behind which made it hard to get behind this one in the end. Ober though does show talent and it will be interesting to see what he does in the future. 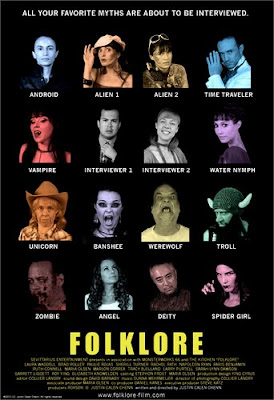 The second feature was the World premiere of the film Folklore by writer / director Justin Calen Chenn was a funny enjoyable story about a government agency designed to keep track of mythic beings on earth. Chenn mines the idea for some wonderful; interviews with a wild range of characters, an android, shapeshifter, alien twins, a vampire, Chinese God, werewolf, Icelandic troll, a Unicorn, a time traveler and a sea nymph. In the question and answer session Chenn said there were many more ideas but you have to limit it to make the movie's length reasonable.
The interviewers Collins Jahn (Brad Roller) and Merle Eppis (Laura Waddell) are spot on as straight man and comedic sidekick. Waddell is particularly enjoyable playing off the slightly exasperated exterior Roller holds so well. The character coming in for interviews make the film with highlights and in particular, the recently separated alien twins Collees (Rachel Rath) and Risa Ipsett (Sherill Turner) who banter and complete each other sentences while still drawing the difference that made them want to explore being separate beings. The over the top time traveler, Taryn Kamas (Napolean Ryan) in his pink shorts and bow tie was hilarious in his bombastic expressions of the coming end to the world we know. The unicorn in human form Eatha Haemm was so spot on it was scary. Actress Maria Olsen pulled off a physical performance that left you not needed to see her transform into a unicorn to believe it.
The beauiful Paulie Rojas plays the sea nymph Nairie Sleen who is destined to fall for our guy Collins Jahn. She channels Audrey Hepburn through a series of clips of her trying to find the offices. When they finally meet it is inevitable that they fall in love.
This was an enjoyable film really a perfect enrty into the festival. We all can look forward to this talented d writer / director Justin Calen Chenn in the future. The actors were all very good and I am sure we will see many of them also.

Sites to Check Out!