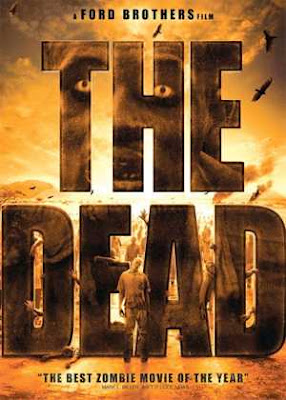 The Dead (2010) - It has been a long time since someone made a zombie movie where the zombies were a relentless shuffling presence, we have been so inundated with fast moving infected that we have forgotten the dread of the shuffling dead. This film for me was a real throwback, paced almost like a 1970's film it was determined to remind us that slow zombies are terrifying. It has a relentless dread that makes it a winner in my book. Modern audiences and their fickle need for action every three and a half minutes may not be as enthusiastic but for this product of the 70s it is refreshing. Written and directed by the brothers Jonathan Ford, and Howard J Ford it is simple and honest in the reality they created. The film starts with the main character who has not been introduced yet dealing with some slow moving zombies in the desert. It is clear at this point he is skilled in not wasting his ammunition as he dispatches them. We will return to this present Brian Murphy later but first we see his story.
Rob Freeman is Lt. Brian Murphy, an air force engineer who is on the last plane out of Africa and in the plane we learn that the dead are turning into zombies who want to chew the flesh of the living, as a dying man reanimates on the plane. The crisis on the ground meant that this plane full of the last aide workers there just took off even before the plane was ready. It is barely in the air and in fact will shortly crash leaving Murphy as the sole survivor. Struggling to the shore after the plane hits the ocean Murphy can see the dead slowly coming for him from all direction, the injured soldier on the beach next to him will give him enough time to gather weapons and some clothes before he must start moving to keep from being surrounded. We see the crisis is no longer a struggle that is going to be won. The country is overrun by the dead and there will be no real safe haven. It is now all about survival and the only way it seem to do that is to keep moving and supplied with enough bullets for when the dead get too close.
The scenery is really amazing in this film, the African plains, dusty reed filled fields and vast vistas but that being said it reveals a real problem too. In this vast area it seem there are a terrifyingly large number of zombies wandering around. 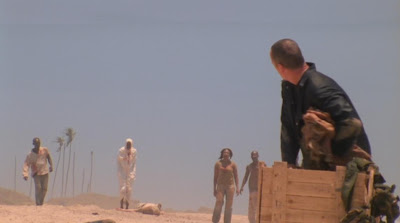 In fact everywhere that Murphy goes there are so many zombies slowly shuffling without rest towards him he really only gets a minute or two of reprieve before moving on. You would think in such a large continent that there would be lots of places where there are no zombies. It seems though every time Murphy slows down there are too many to handle. Certainly there seems to be an innate ability for the zombies to find the living, they seem drawn towards them even from great distances. You have to wonder though what the range of the living beings radar is? Everyday everyone is just shuffling, but would a good amount of them just shuffle on out away from what was civilization?
Don't get me wrong, the tension the zombie prescience for the living adds is great but it just seems a bit unrealistic.
There is another more awkward problem with this film. Giving the film makers the benefit of the doubt, they set the film in Africa, a location that does not get a lot of attention in movies. They unfortunately created a white, blue eyed lead character who wanders around the entire film shooting black Africans in the head. The perceptions of this will certainly create a lot of conversation. We could have had the lead be the soldier that Murphy comes across and works with for a good part of the movie. Sgt. Daniel Dembele (Prince David Oseia) is a strong solid character who when he shoots his own countrymen does not do so with the same Colonial occupation history as a white man. 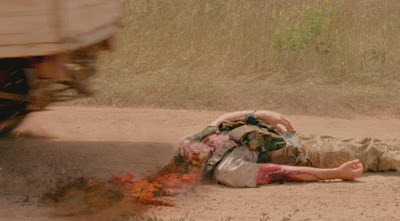 Granted Murphy in the film is an American but the English film production makes for a bit of bad mojo in this instance. It is impossible not to have Murphy kill Africans in this particular movie situation, the continent has a 99% black population so by following this characters story it is the only way things can turn out. I just wonder whether this was a foreseen issue or something the film makers did not even think about. It is not a racist movie, we have two characters one white and won black who travel together and help each other for a good part of the film. They are equals, the living, and there is no mention of race. In fact the scenes of villages and the people from these place I think is a really honest representation of some places in Africa.
When Murphy and Dembele get together with a shared purpose if you were paying attention to the beginning of the film, you know that eventually Murphy is alone again. You may also have noticed he is carrying Dembele's gun so you can guess that this is not the soldier's story. He had returned to his village, deserting his roadblock assignment to find his wife and son. His wife dead and his son missing he guesses that the survivors would have travelled north a couple hundred miles to a military base. 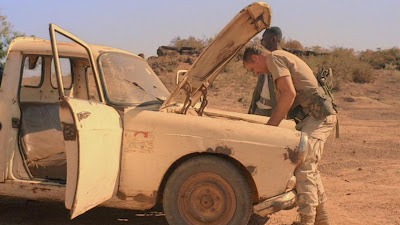 This is where he is heading when he meets Murphy. There is a nice parallel between the two as Murphy also has a family he wants to get back to. Isn't that really where we all want to be if the end comes, with our loved ones. On their journey together they meet former soldier all defending their own village from the zombies and it is clear in those conversations that it is better to die defending your home than out in the desert fleeing for life. It really is a theme that is present, a way to have hope that there can be an ending that is not determined by fear. Dembele wears a necklace with a carved symbol that stands for hope and after his demise Murphy carries it on himself as he completes the journey to the military base for his fallen comrade.
This movie with this bit of hope really is quite bleak. The end for the living is never pleasant, a hurt leg or lack of water can slow you down just enough that you no longer can out run the dead. Soon you are having your flesh bitten from your body, dying in agony. The zombies with their white contact eyes that don't blink just keep coming. The are scary but not in a "Oh My Gross" way but more the building fear that comes from the inevitable slip the living person will make. There are few places to rest and even fewer to sleep. Where they seem to sense the living it is impossible to avoid being found by any zombies that get in range. 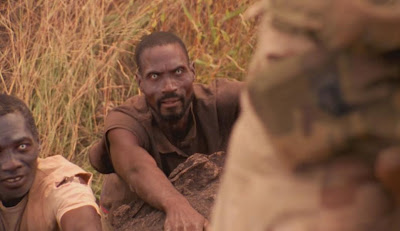 Exhaustion or waking just a bit too slowly and your doom is sealed. It is a really frightening way to try to survive. The attack scene are a good gruesome collection as the zombies bit in chew flesh or the bodies and parts are seen laying around an attacked area. The CGI of the kill shots is less impressive but seem to be the way films are going with gunshots.
Unimpressive also was the way too fast and seemingly impossible fight at the wall of the military base. Murphy by himself has to kill enough zombies to get up over the wall before being grabbed. The scene is quick cuts and reaction inside of people hearing him fight. I thought is all a bit too fast and easy, even a bit impossible. Still for the story's sake he needed to get in, unfortunately it is right at the final moments of the walls holding. The incredibly hopeless ending can't be saved by the small personal moments just before the end. Even some of those are strange, Murphy walking through the crowds of survivors, being touched by them like he is the second coming, then unwrapping his head and revealing his white face. There is a hope there that the film then tries to build on only to kick us in the balls all over again. Murphy fixes the broken radio and actually contacts someone he knows at an American base. 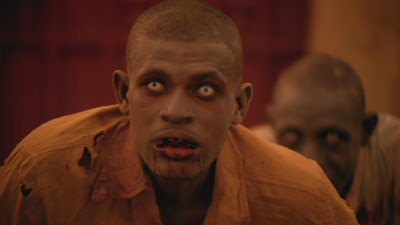 He again gets them at the worst possible moment, the base is about to be over run and his friend is there to tell him his family is probably dead and there is no safe place for the living to go. WOW! really did that huh!
Now I don't mind the downer ending and you know he finds Dembele's son but to end talking about hope as your death approaches I don't know about that. So in all I really liked this film. The kind of zombie film it is really falls in my sweet zone. Sure there are problems but I don't think any intentional malice or callousness. I would definitely recommend this film to those who choose the slower paced scare over the action scare.
Rating (5.9) 5.0 and up are recommended films, some just more recommended than others.
Posted by Eddie Ho at 6:49 AM

Sites to Check Out!